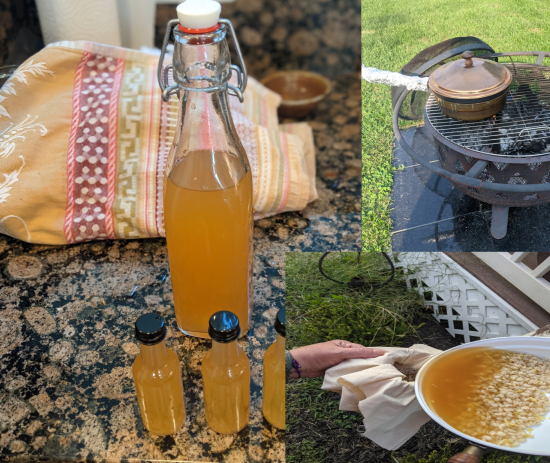 I first made this medicinal restorative in early Autumn. At Summer’s End, while local apples are just becoming available for cider-making, hot and humid September days call for a cool and refreshing drink that will quench one’s thirst yet preserve one’s wits from strong drink. It seems that all my compatriots rely on sekanjabin as a restorative, so I wanted to serve something a bit different. Thus, we shall have Lemon Barley Water!

Barley water has been made for centuries in many parts of the world, from England and Europe to Persia to the Far East. Originally utilized as nourishment for the sick, it eventually also came to be used as a refreshing restorative beverage for anybody, and varieties of it are still consumed in many countries today.

Although I have made mead for a number of years, my knowledge of medicinal beverages is minimal. This project was a learning experience for me, not so much in terms of the skills involved, but in learning some of the fascinating history of medicinal brewing, and of barley water itself.

I was able to document the existence in period of barley water similar to that which exists today. Although I did not unearth a 16th c. recipe, I did find many recipes from ancient times to the present, all with very minor variations. I will gladly further research the ingredients and production of this delicious medicinal period brew.