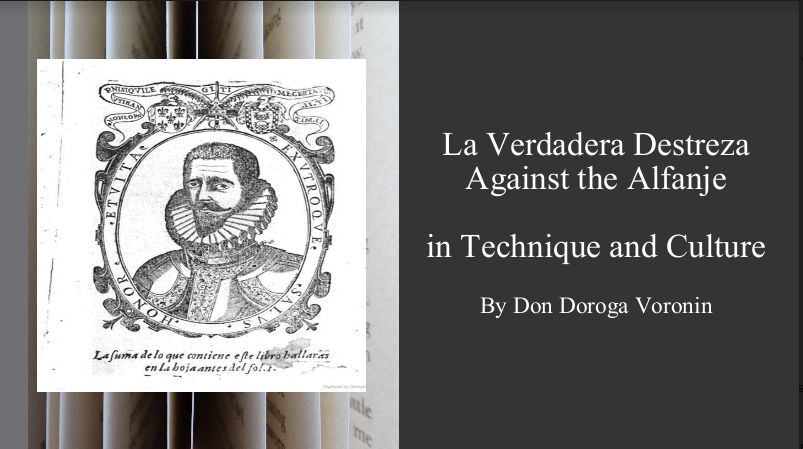 This slideshow is my preliminary analysis of how Luis Pacheco de Narvaez of the style of Spanish fencing called La Verdadera Destreza/Destreza/LVD wrote about how to fight a certain style of weapon, and examining the context in which it was written with the goal of eventually determining how much of this work may be accurate versus posturing and/or racism.

Pacheco is one of the most prolific authors on LVD. This book was written in 1599 and is only the second book that was ever written on LVD, after the one by the founder Jeronimo Carranza in 1569 which was published widely in 1582. I am only looking at a small portion of this book, 9 pages or 6 plates where Pacheco discusses how to fight someone with a curved blade he calls the Alfanje, a Mediterranean sabre. Based on the picture he provides and how other authors describe it, it was most probably what we call a falchion. The person he describes as wielding the weapon is referred to as a Turk or a Moor and he uses these terms interchangeably, and there is a lot of baggage with him doing this.

The reason behind him writing about this techniques has layers:
1st – There seems to be a fear in Christian Spain of either reinvasion by Muslims or rebellion by those that are still living there. Spain as we know it today had taken back the Iberian Peninsula in 1492 after several hundred years of fighting, this is only about 100 years before this book was written,
2nd- As late at 1571 Spain was still fighting the Ottoman empire for control over the Mediterranean.
3rd- The founder of the style, Carranza, actually participated in the suppression of a Morisco revolt (the Moriscos were Muslims that were forcibly converted to Christianity).
4th – Pacheco actually claims to have fought the “Turk” before and has personal experience against this opponent.

Pacheco claims that the opponent is successful in wielding this weapon “due to inconsideration and little wit of our men, than for what they are capable” – he is saying the opponent wasn’t successful due to skill or technique but due to the Catholic Spaniards’ lack of knowledge. He goes on to say that while the weapon might seem scary the limitations are many…. HE CLAIMS:
They have only a single downward attack.
They never attempt a first intent attack and only wait.
They have no thrust and lack blade length compared to the Spanish sword, being about ¼  shorter than the Spanish blade.

Now I am going to over simplify and generalize here, but I think that is only fair as it is exactly what Pacheco did. Almost every one of his 6 responses can be broken down into:
Stay far enough away (know your range), Feint, free the blade (disengage), and counter after time or after the attack.
He goes into some items like how to close on angles in various directions, what happens if the opponent comes back up real fast, but the response still follows those same steps.

The big question I want to investigate in the future is…
Is what he wrote actually valid as instruction?

First…. Was this just written to sound impressive?
Some evidence points that he might have just been writing it to gain social prestige in the royal courts rather than it being practical (some of the writings of Pacheco’s social enemies at the time accuse him of doing just that – Quevedo wrote a play in which he describes a naïve youth and possible caricature of Pacheco was trying to teach how to fight the Turk in order gain favor in the royal court).

Racism: he uses the terms Moor and Turk to mean the same thing but they are not the same culturally, but he groups them together as a single “other”, Moors were Muslim inhabitants of the Iberian Pennisula and were from a certain area, originally Morocco, Turks were supposedly from the Ottoman empire, this generalization raises serious questions about his understanding of the enemy.

Weapon: what type of weapon did the opponent actually use? It looks like a falchion, but other Mediterranean and middle eastern weapons had curved blades, like the shamshir, and they also might have been used in period and again he is grouping them together.

Technique: His opponent only has one downward swinging strike he claims. I want to look into the cultural fighting styles that used the curved blade in this period to see if it was true, as it really undervalues the enemy and goes back to him possibly trying to sound impressive rather than having true content.

In summary, with such a small passage there is so much to look into in terms of technique as well as in terms of cultural exploration of the history of Spain, their opponents, the politics, the weapons they used, the time period and the lives of the people that lived there.