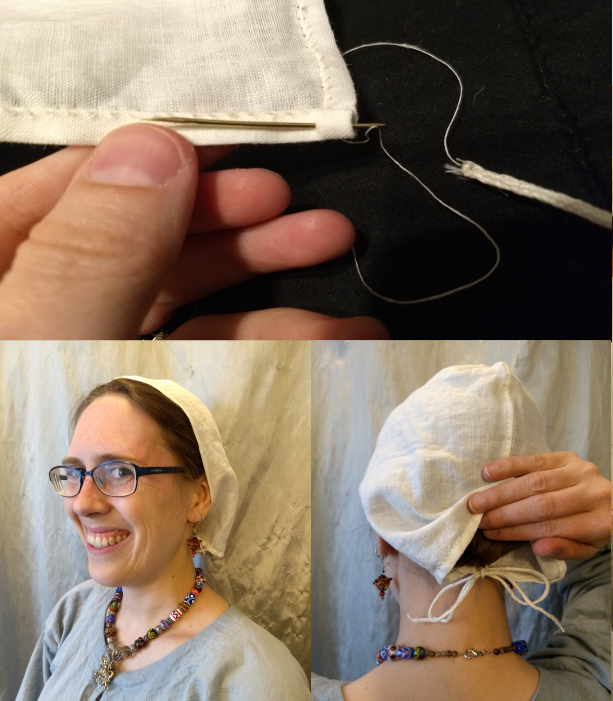 This cap was my first foray into hand-sewing with a period bronze needle. I used linen fabric, sewn with linen thread (beeswaxed for added durability), and linen lucet cord ties (also made by me). I used period-style shears as thread-snips. Mine are steel rather than iron, but are constructed like the ones in the extant finds. I used back-stitch for the structural center seam, and overcast/whip-stitch for the seam finishing and hems. I used a combination of stab stitch and overcast stitch to attach the lucet cord ties to the bottom corners of the cap. My cap measures 22 1/4 in. over the head at the front edge, 5 3/4 in. from the front bottom hem to the back seam, with lucet cord ties that are 9 1/4 in.

The project was inspired by Viking-era finds of caps from Jorvik and Dublin. While those still in existence were made of silk or wool, there may be a possibility of linen caps as well. Linen does not hold up well in the archaeological record, so this theory is primarily conjecture, but we know that Viking-era Scandinavians did have access to linen and used it for other clothing, especially undergarments. Since I didn’t have the right type of lightweight, gauzy silk or wool, I opted to use a light handkerchief linen instead. The ties may have been originally finger-braided or twisted rather than made with a lucet, but the lucet is what I had available, and I haven’t yet learned the other cord-making techniques (although I would like to in the future). I shaped my cap similarly to one of the rounded/fitted silk caps from Jorvik, as opposed to shaping it by taking a dart in a rectangle and keeping the point as in the caps at Dublin.

That same rounded silk cap from Jorvik is also the largest: 21.5 in. long over the head (front edge from hem to hem), and 7.5 in. wide from front bottom hem to back seam. Mine is slightly longer and narrower due to my head size, but it seems to cover about the same amount of my head as the extant cap covers the mannequin head. Most other extant caps from Jorvik and Dublin are quite small, and would not cover an adult-sized head. There are theories that either they were children’s caps, or they were meant to be small because their main function was to help secure a veil that would cover it. There is evidence in support of both theories, and either or both could be correct (or neither). I think the veil theory is the most plausible, especially after trying to wear a veil directly on my fine, slippery hair — it does not want to stay, and my cap definitely helps secure it. The cap can also protect a veil from hair oils, etc., so the veil won’t need washing as often, and the cap can be washed more frequently, as with other period undergarments.

I am pleased with how my interpretation of this cap came out. While in the future I would like to try one in silk or wool, the linen version is effective for my needs, and it was an interesting experiment to use the bronze needle.
My sources and other information can be found in my documentation here: https://docs.google.com/document/d/13yBMVgpFUUnET_VeGwUtJUNJ0ZGG9x1uqMWYAkv4oiY/