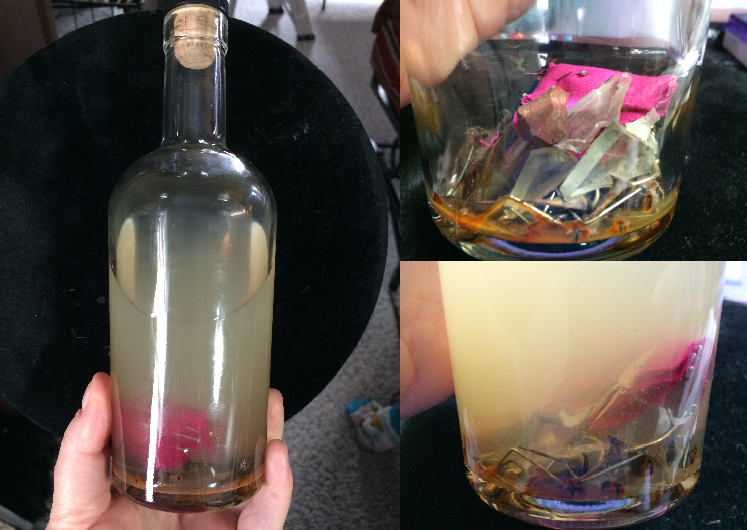 While in lockdown, it was pretty logical to think about how people, then and now, deal with taking control of situations that they know they have no control over.  Magical thinking, both as the psychological term and the ritual, have powerful connections to our minds and the world we live in, especially in times of plague.

I love weird, occult items from the past.  The merging of human belief with the material world – long labeled “superstition” and usually not analyzed or understood from an anthropological / psychological point of view – is a fascinating and rich world.

Even if the amulet created to ward off evil or negativity is useless in that regard, it gives the maker some positive results: a sense of accomplishment, something they can create *right now* with on-hand supplies to counter the feelings of hopelessness and helplesses, which in turn can give them some satisfaction that they did something industrious to combat a threat perceived or imagined, which in turn can change their mindset and attitude (which can also change the reaction of those inimical people, and step a little more warily n public upon seeing the changes in body language).  So, do they work?  Maybe, in fact, they do.  A change within can create a change without, even if it just breaks a cycle of confirmation bias.

For a long time, I’d been meaning to re-create a witch bottle.  I looked up specific finds, made lists of what was found on various vessels, and charted what I thought I could find – or appropriate substitutions.  It occurred to me that the making of a witch bottle was more like a medieval treasure hunt, and the act was investing time and effort (the hunt itself) coupled with sacrificing of items, sometimes very personal or sentimental (the choice of what to put in the bottle), would make for some powerful emotional attachment.  Or detachment, perhaps.  It’s hard to differentiate.

I had reasons for each thing I chose, and for the number of each thing I chose, which I can go into great detail if anyone’s interested.  The short list: hair, fingernail clippings, “urine” (vinegar, one of those substitutions I mentioned), iron nails, brass pins, fish hooks, glass shards, thorns, pins in red felt hearts, pottery shard, in alcohol.  I didn’t boil the mix – I’m allergic to alcohol, and instead of burying it, I have it in a place of honor “hidden” from my line of sight by the very computer I’m typing on.  I thought about the objects that were chosen, and the time of year, and the color and value to the owner of the things that were placed in the bottle.  I even thought about the type, shape, and composition of the bottle.

This was a thought-provoking experiment, and I enjoyed my attempt to re-create the zeitgeist of a different time and place.  And maybe that’s exactly what a witch bottle’s purpose is, to remove us from our desperation a little?  If so, then this bottle did its job very effectively.

I find myself collecting little tidbits for the next one…

Some, but not all, URLs I used: