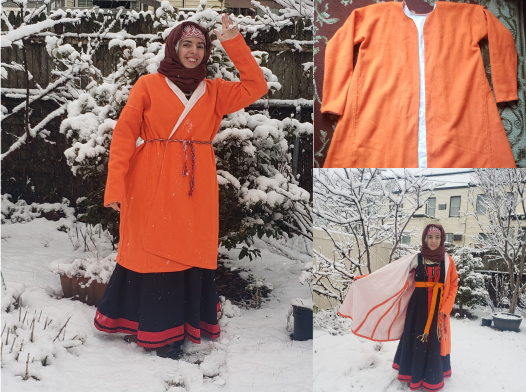 Ohaben’ is an open garment worn by men and women in late period Russia. Women’s examples have a different style of opening than the men’s. The women’s version of the garment is sometimes called “opashen’” as well. There are several extant examples surviving from royal collections. Ohaben’ was originally clothing of the nobility but in the 15th to 17th  centuries the style is very likely to spread to the common people in that time.

This is a womens ohaben’ garment from the late-period Novgorod area for an impression of a wealthy peasant. The garment is based on an extant piece from 1628 in the Romanov collection. It is modified based on historical evidence from research to fit the status of the wearer. It is completely hand sewn wool with a linen lining. Main seams and top stitching are done with linen thread. Seam finishing is done with color matching wool thread.