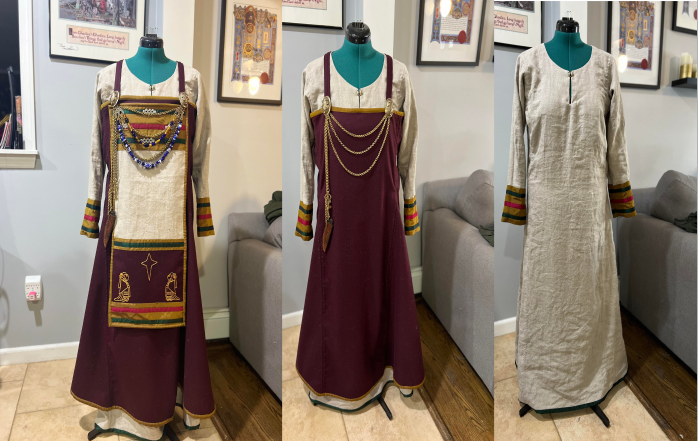 This research will explore the Lady of Tuna, a pendant discovered in a grave site dig in modern day Sweden and how the depiction of her clothes inspired me to re-create a wearable outfit in the here and now.

The Lady of Tuna was discovered in a grave find, in Tuna, Alsike, Uppland, Sweden.  The  Lady was determined to be made of silver and gilded in gold.  By the time she was discovered, the gold had weathered away and only existed as you see above.  The reverse side of the pendant is carved out and has a loop carved out for stringing.  The pendant itself has no absolute age, but it has been relatively dated to the viking/iron age.  Thought to be made in the likeness of Frigg, the Lady of Tuna is a rare find demonstrating what women’s clothing may have looked like.

What would her clothing be made of and where were examples found?

In the image of the pendant, you can see she is wearing what appears to be an underdress, a hangerok (an overgarment dress held up with straps), a separate train, a shawl, beads, brooches, and what I like to interpret as a panel.  In order to recreate the clothing displayed, I relied on the extant materials found in the gravesites in Birka, Sweden – linen, wool, and silk.

Fragments of linen were discovered within brooches as well as laying out in the graves.  Most fragments discovered were natural colored linen, but two fragments unearthed were found dyed, one from site Bj 60A was dyed red and another from site Bj 762 was dyed blue.  A rather large portion of wool was also found in Birka in Grave 597.  As with the linen, some fragments were discovered within brooches, but other pieces were on top of the linen pieces (essentially saving them from the elements).  There were two colors of wool fragments discovered in this gravesite, one colored a dark blue and one dark brown.  Amongst the fragments of linen and wool, several scraps of silk were found – some even still attached to the garment pieces. Silks located were determined to be a taffeta silk which was folded over the edges of the hangerok and linen. It was determined that the silk was used as decoration on both the linen and wool.

When would this have been worn?

The underdress, hangerok, and panel are theoretical garments worn by women in the 9th through 11th centuries in Scandinavia, including where the Lady of Tuna was found in modern Sweden.  Other items found that are depicted on the Lady of Tuna include brooches and beads which have been dated to the period 850-900.

Why did I choose to make it the way I did?

The evidence of the underdress and hangerok discovered at Birka is severely limited to small textile fragments that have been preserved by resting against metal brooches or scissors.  My recreation of the clothing is based almost entirely on conjecture and educated guesses (as is further discussed in the Process document) as to how each article of clothing is constructed and from which extant material.

Underdress – The underdress is the theoretical linen undergarment worn by women in the 9th through 11th centuries in Scandinavia, including where the Lady of Tuna was found in modern Sweden. Archeological evidence does not propose any length of the underdress.  However, one can assume that the garment itself is at least as long as the hangerok itself.  My assumption is based on the fact that on the Lady of Tuna, you can clearly see a decorative band on what could be the bottom of the hangerok and there is clearly a garment going to the feet of the pendant.

Hangerok – The hangerok was worn by women in the 9th through 11th centuries in Scandinavia. The evidence of the Hangerok at Birka is severely limited to small textile fragments that have been preserved by resting against metal brooches or scissors. The garment most likely resembled a wool tube around the bust and flowed out from the hips using another gore type construction, extending from under the armpits, with linen straps to suspend it from the shoulders. While we do not have evidence as to how long the garment was, in creating my hangerok I looked to the Lady of Tuna for inspiration.  In doing so, my hangerok goes to about mid-shin (again, based on the decorative band on the pendant).  With respect to the straps, of the over 128 brooches found at Birka with textile fragments still attached, only 14 had woolen loops and 22 had silk loops.  The rest were all linen.  It can be discerned from this evidence that most of the straps were made from linen.

Panel – Lastly, there exists a suggested reconstruction of the hangerok which consists of two separate hanging panels which would have been worn over the underdress.  However, after looking closely at all of the pendants indicated in “a” through “j” below, there is no clear evidence that  the hangerok was panels pieced together (see image directly below).  It is my interpretation that a single panel was worn as another form of dress decoration, which adds to the beauty of the outfit.  Looking at the Lady of Tuna (image “i” below), you can see a thin line in the front which supports my conclusion.  Also, on image “j” from Denmark, you can see a panel as well hanging in the front.

As to the construction of the aforementioned garments, such extant examples were not found in Birka.  There were others, however, specifically the Skjoldehamn tunic, which suggest a gored construction. Further, the evidence at Birka suggests a keyhole neckline on the underdress due to the smaller penannular brooches found near the neck.