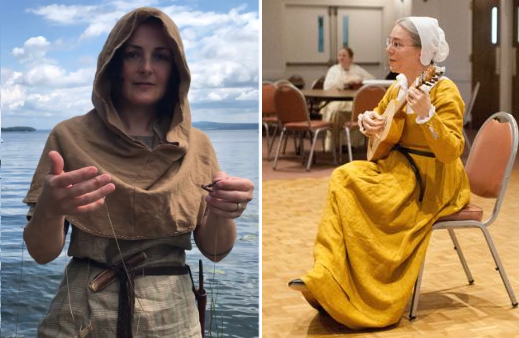 The MOAS Office is pleased to share these introductions to our new King’s and Queen’s Champions of Arts & Sciences, shown in the photo above with Corotica on the left and Ysabel on the right.

A little about me: heavy fighter (Northern Army 3rd cohort and Running with Scissors), brewer, cook, fisher, forester, artist, squire, middling crafter, garb procrastinator, and equestrian. I reside in the Shire of Mountain Freehold and am a member of Clanne Preachain, a multi Kingdom household and Fir naLeon, a Northern Household.

I normally portray a 1st C BCE or CE member of the Silures tribe in Southern Wales. I bounce between Bronze, Iron Age/Pre-Roman British, and a Romano-Britain Persona. Unless I’m doing a continental Iron Age celt from Hallstatt. Unless I’m doing 13th century. Unless I’m portraying a Hetaira. Maybe eventually I’ll do a Migration-Era Kievan Rus, or Scythian. I’m slowly getting dragged into Landsknechte, which is entirely Sir Zippy’s fault.

I am a member of the East Kingdom Brewers Guild, Known World Courtesans, and East Kingdom Foresters Guild. In the Fosters I have achieved Master Forester and am a member of the Rangers, an Order of Merit in the Guild focused on minimal overland historical camping, primitive camping, bushcraft, and outdoor activities outside of the usual SCA camping events. I am also “Chief Ranger of the Western Marches”, organizing Ranger activities in the Western part of the Kingdom. When I lived in Atlantia, I was a founding member of the Foresters Guild in that Kingdom, and its first Warden.

My great A&S loves in addition to Forestry/outdoor related activities are historical cooking and brewing from prehistory to modern day. I enjoy exploring brewing and cooking throughout the entirety of SCA time periods and the full scope of food in world culture, although the Imperial Roman era has been a focus of mine over the last few years.

To continue service and wordfame to the Easts artists, The Consort’s Champion, Ysabel da Costa and I will be maintaining the Meet the Artist Monday series, implemented by our predecessors Sugawara no Naeme and Pan Jan Janowicz Bogdanski.

In honor of the incoming reign, I encourage artists to look into concepts of cultural diffusion: the embracing of ideas and customs from one society to another through migration, trade, or war. Some examples are how Buddhism followed the Silk Road, the adoption of the Greek Humoral system throughout time by multiple cultures, the spread of winemaking from Greece and Egypt into Northern Europe, things like that.

If you wish to contact me please feel free to reach out to me at: 204512@members.eastkingdom.org

I’m Ysabel da Costa, and my local group is the Barony of Carolingia. My focus is recreational research on many topics, including early instruments, dance music, military trumpet repertoire, Bengali embroidery, natural dyeing, and more. I enjoy dancing, sewing garb, cooking, and learning about all the fascinating things other people have done and studied. I’m presently Captain of the Waytes of Carolingia (the Baronial dance band) and a member of the Accademia della Danza, the Carolingian Needleworkers’ Guild, and the Keepers of Athena’s Thimble.

Personae: Ysabel da Costa was born at the turn of the 16th-century to a Portuguese Converso family. Like her famous counterpart Dona Gracia Mendes Nasi, Ysabel has sojourned in many cities: Lisbon, Bayonne, Ferrara, and most recently Constantinople. Lilavati Datta is a secondary persona I am developing; she lives in the Hooghli district of 16c Bengal. My husband, who rarely plays, is a Portuguese trader who is usually away at sea. He has taken a second wife on his travels (unbeknownst to Ysabel), so he’s my husband in both of my personas.

I would love to hear about your work, both the things you’ve actually done and projects that are still in the planning stage. I’ll be assisting the Sovereign’s A&S Champion, Corotica merkkā Senebelenae, as she continues the previous Champions’ successful Meet the Artists Monday series on Facebook. In honor of the upcoming reign, I’d particularly like to encourage our study of pre-1600 Asia, and the exchanges of goods and ideas in both directions between Europe and Asia. These exchanges took place throughout the SCA period — there are even a few Dravidian loan words in Biblical Hebrew!

Please email me to talk about your current or potential projects, or if I can be of assistance with research and documentation.