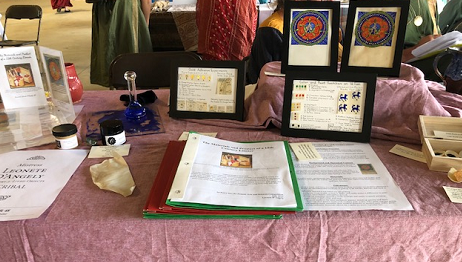 Recently, the MoAS office has debuted a class called Consent in A&S: giving and receiving feedback. At the moment, we are still working on piloting that class a bit more before we make the notes from it publicly accessible online. However, I wanted to take a question that came up at one of those classes and discuss it here, as I think it provides a good example of what the class is trying to help with.

EXAMPLE
Novice Artisan: Asks a more experienced artisan if they should do X, Y, Z project for an upcoming competition.
Experienced Artisan: Advises them to do a different, more traditional, project instead.
Novice Artisan: Initially very excited about their project idea, our artisan is now upset/discouraged when they were told it might not be the best idea to pursue it.

This type of interaction may seem familiar to you. If you are involved in the Arts and Sciences, you may have had a similar interaction yourself, or heard of someone who has. While we want every artisan to come away from any A&S interaction with a positive feeling, sadly this does not always happen.

However, it is not necessarily because someone was being purposefully mean or hurtful. Instead, misunderstandings can and often occur because of unclear communication and because two people have different perspectives on the same event.
For example, each artisan in the above example has a slightly different perspective on what just happened.

Experienced Artisan: Likely believes that the novice artisan is primarily focused on doing well in a competition, and was providing feedback with that idea in mind.
Novice Artisan: Wants to share their work, but is less concerned with winning or scoring well, and more concerned with trying new ideas that people will find interesting and worthwhile.

To try to get both of these artisans thinking on the same page with each other, it can help if they each remember two specific communication strategies:
1) Repeat what you “think” you heard.
2) Ask for, or offer, specific goals.

The experienced artisan might benefit from saying something like: “What I’m hearing is that you want to enter a competition and do well, is that true?” or they could ask a more broad question, such as “What are your goals in completing this project?”
The novice artisan might benefit from saying something like: “What I’m saying is that, while I want to show my work off in a competition, I am more concerned with trying a non-traditional project and sharing it with the sca community.” or, they could say, “I hear you telling me to do a more traditional A&S project even though I told you specifically that I did not want to do that. Can you instead try to help me structure the project I want to do so people get value from it, and find it interesting? I’m ok with the fact that it won’t score as well the competition?”

This type of open and honest communication is not easy. It is a lot of work, and a lot of courage. But it can be hugely beneficial to individual artisans, and to the reputation of the arts and sciences as a whole.

Ultimately, giving and receiving feedback in A&S are both hard things to do. Please do your best to treat each other with compassion.

My thanks to Mistress Elena and Master Philip for their help with this question.
-Mistress Elysabeth Underhill

Note: Image is from Mistress Leonete D’Angely’s A&S entry at the Pennsic War Point, where she earned top score in Catagory 3.