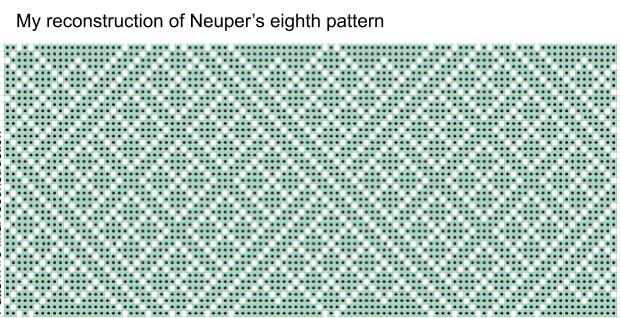 Here’s a link to the 16th century German brocaded tablet weaving book that I analyzed: http://diglib.hab.de/mss/57-aug-8f/start.htm

This video explains how to do the modern pattern analysis technique I used in this project.

Symmetry analysis is a method for analyzing individual pieces of art as well as collections of related art by determining what kinds of geometric symmetry the artworks exhibit, and then determining what groups of symmetries appear in the artworks in a collection.  There are only seven possible combinations of symmetries that a one-dimensional repeating pattern such as in tablet weaving can have.  Neuper’s patterns are all geometric in style, unlike many other examples from period that have pictorial motifs.  For the purpose of this analysis, I used a modern pattern book by Nancy Spies where she charted Neuper’s patterns so I would not have to chart all of them myself.  I spot checked Spies’ patterns against the originals as well as examining some of Neuper’s patterns in depth in cases of inconsistencies.

Of the 87 patterns, most of Spies’ reconstructions fall into the three symmetry groups that include half-turn symmetry, with one pattern having only vertical reflection symmetry, and eleven patterns having no symmetry apart from the repeating nature of the pattern.  The one anomalous pattern was unfinished in the original manuscript.  Spies used vertical reflection symmetry to complete it, while I used half-turn symmetry to complete it, in keeping with the majority of the patterns in the book.  A chart of my reconstruction appears in the Appendix to my paper.  In addition I found the eleven patterns with no additional symmetry could have other symmetries with correction of mostly minor errors.  With repair, all patterns in the book could have half-turn symmetry, and the majority would have no other symmetries other than the half-turn and the repeating pattern.  This implies that the half-turn symmetry is the dominant symmetry type favored for brocaded tablet woven bands in the Nuremberg region in the 16th century.

14 thoughts on “Filling In The Gaps: Using a modern pattern analysis technique to identify and correct errors in a period pattern book – Rosina von Schaffhausen”