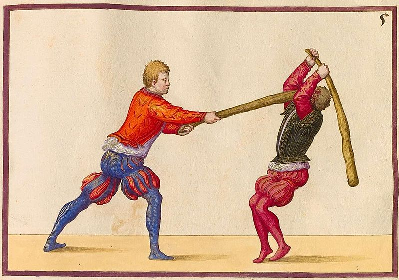 Different fighting principles exist in different regions of the world. Examination of fighting manuals from  the Eastern and Western world have revealed what can be considered “universal” fighting principles,  which are consistent between two very distinct cultures. The fighting manuals are The Book of Five rings  by Miyamoto Mushashi (representing the Eastern culture) and Great Representation of the Art and  Practice of Fencing by Ridolfo Capoferro (representing the Western culture). Four fighting principles  which are being defined as “universal” will be presented. The four “Universal” Strategies/Principles are  Direct Attack, Indirect Attack, Broken Rhythm Attack and Counterattack/Counter timing. The paper will  not discuss specific techniques such as sword position or how to strike, but rather strategies and  principles that can be applied to any system or style of fighting to gain an advantage. Explanations of  each strategy will be presented along with excerpts from both manuals discussing each principle.