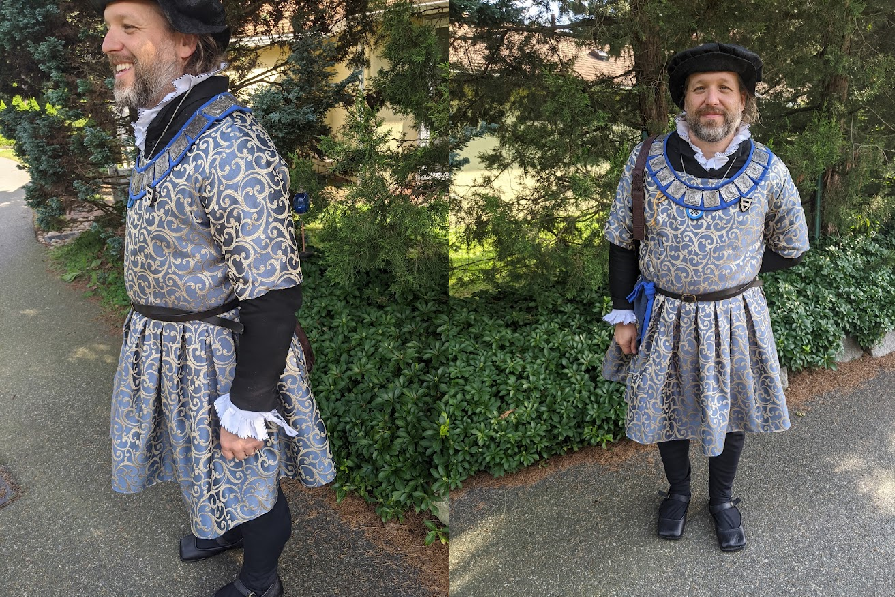 As events are starting to be scheduled again, it became clear that myself and my husband needed sets of garb we were happy with, something I had been putting off for quite a while. Making Richard’s garb was my first foray into men’s clothing, and my first attempt at Henrician-era garb. I primarily referenced The Tudor Tailor and The King’s Servants in planning a basic set of garb and patterns. The outfit includes a shirt (with decorative embroidery by Richard), a pair of joined hose, a doublet, and a jerkin.

The most difficult part of the process was in fitting the hose. The other pattern pieces were adapted from the sample patterns in The Tudor Tailor, using Richard’s measurements to create a garment that required only minor adjustments to fit. The hose, though, needed to be shaped over the legs. This was my first attempt to create something so fitted (I don’t usually even sew with stretch fabrics). The main challenge, of course, is in creating a tight fit while still allowing movement. Bias-cut wool has some stretch, but I still had to fight to get it where I wanted it (with lots of pinning and unpinning). The final result had knees and ankles baggier than I wanted, but apparently within a normal range for such a garment. I struggled to fit the attached feet and ankle gussets (which somehow pull to the side, creating creases at the ankle), but Richard assures me they’re comfortable enough in his shoes.

I had to learn several other minor skills while sewing this outfit. Though I was pressed for time and sewed everything by machine, I did hand-sew the buttonholes of the doublet and the eyelets to lace up the hose. I learned how to make lucet cords to tie the doublet to the hose (which were more useful than fingerloop braids, as they aren’t restricted in length). I also learned how to sew fabric buttons from instructions in The Medieval Tailor’s Assistant, which was a surprisingly fun and satisfying process (with a really adorable result)!

The shirt is made from white linen, and the hose and doublet are both black wool. The jerkin is made from an upholstery fabric at my local discount fabric store. It’s not the most accurate (in content or in pattern), but we wanted him to have something blue-and-yellow/gold to wear to Carolingian events (and were pressed for time, thus didn’t order online). The wonderful thing about this outfit is that I can easily make more jerkins to wear over the hose and doublet, thus increasing Richard’s wardrobe greatly without needing to make an entire set again. (Though in the future, maybe I’ll make him better-fitted hose!)