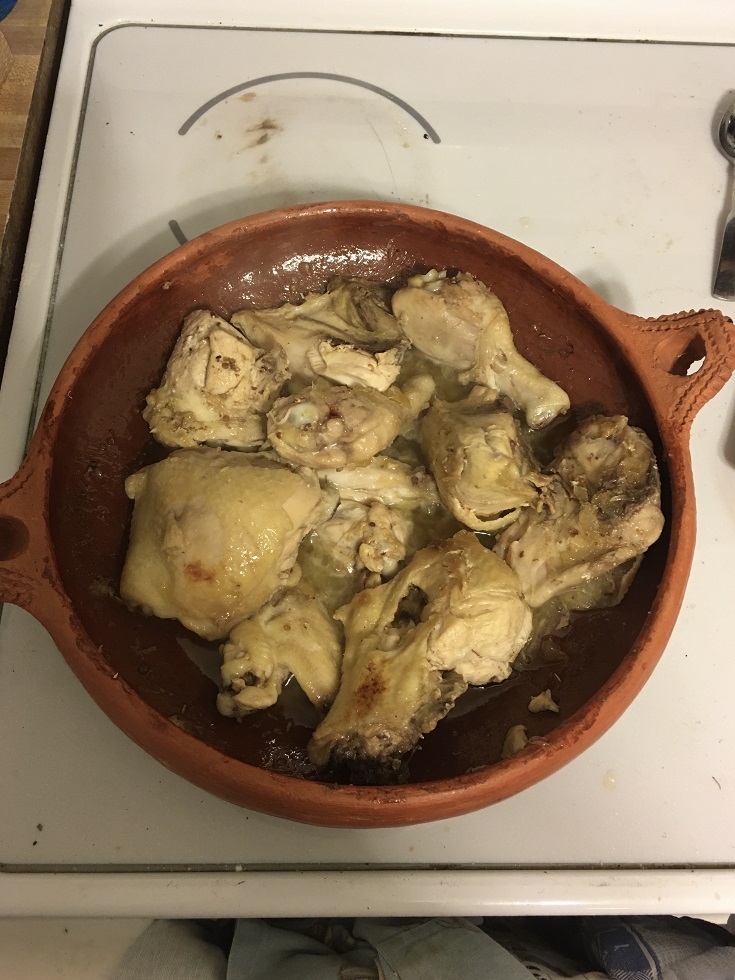 Sour orange chicken from Scents and Flavors, Charles Perry’s translation of the 13th century Syrian cookbook Wusla il-al-Habib. The recipe is on p. 65 under the heading 5.55.  I have made this dish twice — once a year ago with Seville orange when they were in season, and again in the Fall when they were in season.
Fried chicken with a sweet-sour citron glaze. The recipe says to use orange or citron. I adapted the recipe slightly, adding some cracked coriander seed and a bit of saffron. I added the coriander because it works well with citrus flavors, and the saffron mostly for color. I consider the citron and the orange versions are equally good. The recipe is fairly simple and I think it could be easily scaled up for a feast.

Scents and Flavors 5.55 (P65).
“Sour orange chicken. Take sour orange or the sour part of citron, extract the pulp, and mix into syrup. Thicken to the consistency of beverage syrup. Fry the chicken and add. This is an unusual dish. When serving, plate the chicken and garnish with citron or orange flesh all over, on our he breast and sides and underneath.”

The way the recipe reads, it seems possible that the chicken is fried whole, which I did not do. I used a 3 lb chicken, cut up and fried it in pure (NOT extra virgin) olive oil. After the initial browning, I added a teaspoon of cracked coriander and a pinch of saffron. Meanwhile, I took the seeded flesh of a large etrog citron (or a Seville orange), 1/2 c water, and 1/4 c sugar. I boiled the sugar and water until dissolved and added the citron, reduced the heat to a simmer and cooked to a syrup, which I then added to the frying chicken. The syrup forms a lovely sweet/sour glaze. I served with couscous, but in medieval Syria it would probably have been served with bread of some sort. I did not, unfortunately, have enough citron or orange left to use as a garnish.