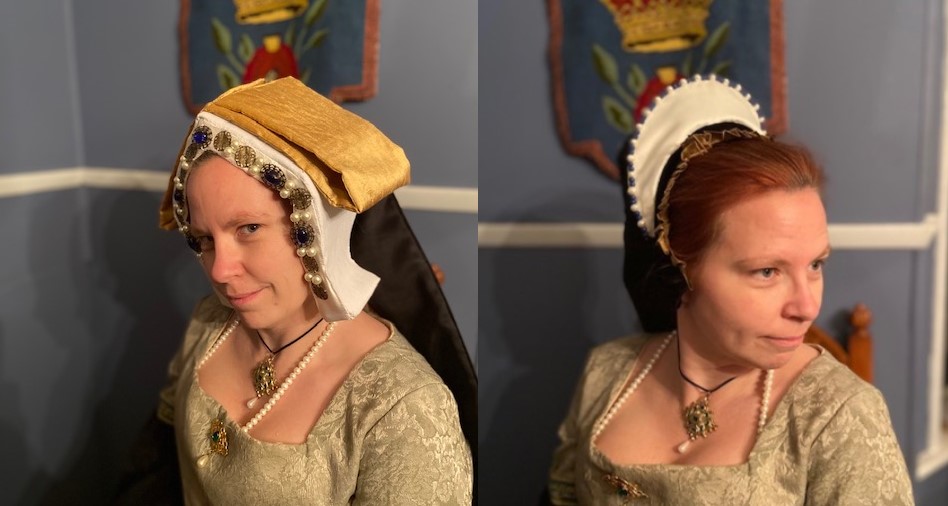 For the well-dressed Tudor, the choice of what to wear carried layers of economic, social, and religious implications. While a court lady in the Tudor era may have had less variety in her wardrobe and fewer choices of color, fabric, and style, than a modern woman, what she wore each day represented a statement about her family, wealth, and even her religious and political leanings. For women of the Tudor court, fashion was political.

The French hood, brought into fashion by Anne Boleyn, represented a departure from the earlier English gabled hood and came to represent both Anne Boleyn’s political faction at court, as well as possible affiliation with the growing Protestant movement. In contrast, the English gabled hood came to be seen as the choice of the more conservative faction at court, and was prominently adopted by Jane Seymour, Anne’s successor as queen.

For this project, I chose to recreate both the English gabled hood and the French hood. Each hood is hand stitched of buckram, satin, silk, and velvet. The patterns are based on those published in The Tudor Tailor by Ninya Mikhalia and Jane Malcolm-Davies.

18 thoughts on “She Wears Her Faith as the Fashion of Her Hat: The Role of Politics in Tudor Fashion 1487-1537- Lillian Hutchinson”