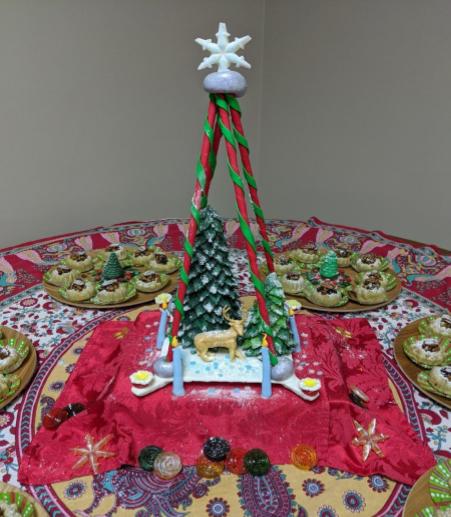 This is a Christmas Pyramid subtletie created for a Shire Yule feast with a German theme. My goal was to demonstrate a variety of sugar techniques to create a period-plausible edible centerpiece suitable for a celebration, including garnishes for individual servings, as well as treats for the children. This was a very complex project, involving multiple sugar work techniques and artistic effects for a large display. It was especially challenging because I only had three weeks to organize, design, and execute the physical project, which would normally require at least two months to complete.

I was inspired to make this subtletie because I owned a large wooden Christmas pyramid (Lichtegerstelle) when I was younger. Although Christmas pyramids are considered “traditional” decorations, not much is known about their earliest origins. My research goal was twofold: 1. Learn the history of various period sugar sculpture techniques; and 2. Uncover the stated-but-undocumented connection of Christmas pyramids to the sixteenth century. Information has been scant, though I am still pursuing additional sources (both SCA and mundane) in Germany and Austria.